A parabolic flight campaign is the entire mission associated with the parabolic flights.  For this campaign, that involved a pre-Test Readiness Review (TRR) on Friday, June 5th, followed by the actual TRR the following Monday (as well as loading the plane and installing hardware), four consecutive flight days (Tuesday-Friday), unloading the aircraft on Friday, with a backup day on Saturday.  Since we study plants, that means all of our planting must be done beforehand, and must be done so that each day, we can have the same age of plants.  For this campaign, that means planting dormant plates and activating them in a staggered pattern, so that we can have (for example) 8 day old plants on Tuesday, Wednesday, Thursday, and Friday.  Since we will be in Texas, and not close to UF, we also have to arrange travel, lodging, meals, and set up a portable workstation and laboratory to do the work we need to do while we are there.  A lot of planning goes into one of these campaigns, usually starting about three months before we depart.  But it is this planning that makes these campaigns possible—and the more planning, the more successful it is too. 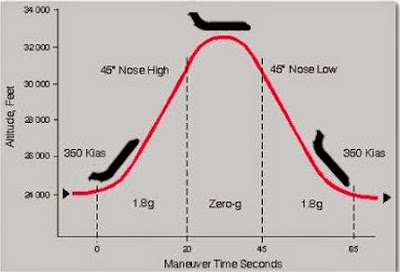 A parabolic flight uses commercial aircraft to achieve true zero gravity by adjusting its angle of flight.  The diagram (above) shows one parabola and how the plane is able to achieve this altered gravity state.  In our case, we will fly forty parabolas in one flight, for a campaign total of 160 parabolas.  We depart and arrive at Ellington Airport (formerly Ellington Field) in Houston, TX.  What about the nickname, “Vomit Comet?”  Though it is not the official name of the aircraft (that would be “Weightless Wonder”), it does accurately reflect the relatively high rate of motion sickness induced by this kind of a flight pattern.  Anti-motion sickness medication is usually administered to all flyers prior to each flight, and from experience, they really do work.  The flight is very smooth also.  Save for an abrupt end to each of the zero gravity portions, the rest of the flight is more akin to a boat’s motion than a roller coaster.  Weightlessness is truly a unique feeling.

We use parabolic flight to see rapid responses to zero gravity, hyper gravity, and changes in gravity in general.  NASA has used parabolic flight in the past to train astronauts, and many other institutions and organizations have used them for testing their systems and techniques in zero gravity, prior to true spaceflight.  Being a plant space biology laboratory, we are particularly interested in plant response to gravity.  Plants have not evolved to respond specifically to zero gravity, and thus in order to adapt to this new environment; they must engage previously-existing pathways.  What parabolic flight allows us is to look at what happens first—the plant’s initial response to a change in gravity, whether that is from normal 1g to 2g (beginning of the parabola), 2g to 0g (middle), or 0g to 2g (end).  Spaceflight allows us to look at adaptation to a prolonged zero gravity environment, which is extremely valuable.  Combined with parabolic flight, we can generate a more complete picture of how plants respond to changes in gravity.

Here is Dr. Paul explaining a little more about what it is like to ride on the "Vomit Comet". 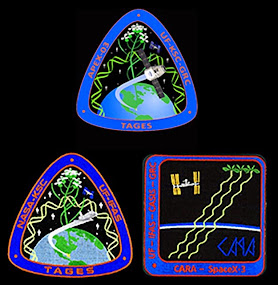